Last summer I made an epic 7,000-mile road trip with my sister Lee and her two kids, Nora (who was 9) and Harry (who was
12 when we started the trip and 13 by the time it was over.)
We
drove from Las Vegas to the coast of North Carolina then back by way of Upstate New York.

In the course of the journey we made pilgrimages to sites of deep Americana, the first of
which was Monument Valley, which straddles the Utah-Arizona border.
This of course is where John Ford filmed many of his Westerns. The inn
his company stayed at when on location there is still in business, with
a museum and part of the outbuilding that doubled for Colonel Nathan
Brittles' quarters in She Wore A Yellow Ribbon: 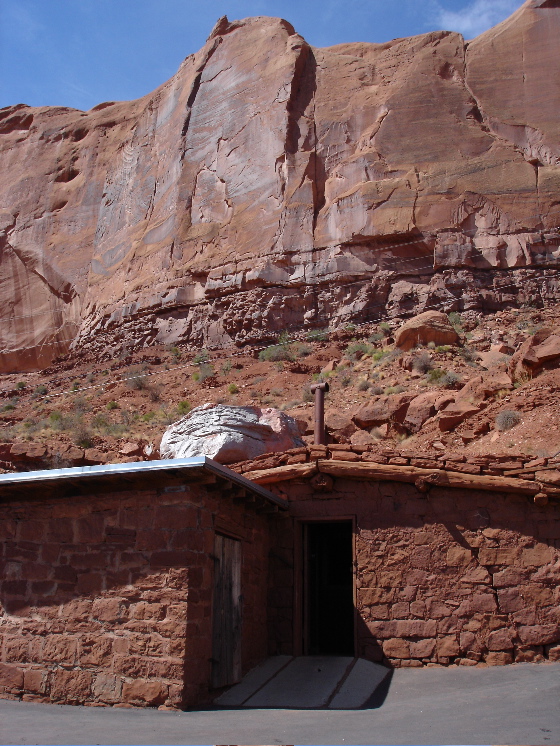 [The boulder on top of the roof is a prop.]

You
can see immediately why Ford loved this location. Although its mesas
and rock formations are indeed monumental, they have an almost human
scale — unlike the Grand Canyon, for example.  (If the Grand
Canyon can be ranked among God's masterpieces, Monument Valley was a pièce d'occasion.)   And the formations in Monument Valley are scattered
about in a pattern that yields new vistas, a new sense of space, every
few hundred yards. It might have been built as an epic movie set.
It's
weird to visit a place you feel you know well just from movies, and
moving to visit a place that a great artist has appropriated as part of
his myth about America, a myth that has helped shape what America is,
or at least how it sees itself. The scenic route through the valley is
still just a dirt road, rough even on my high-slung 4-WD vehicle. The
valley is heavily visited, but you still get a sense of being in a
wilderness, or a dream of wilderness . . . the other tourists are like
fellow audience members in a dark movie theater, there but not there.