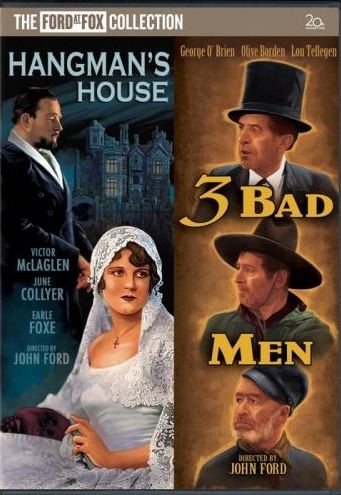 Hangman's House is the last, and least, of the five silent films included in the new Ford At Fox box set.  It's not a bad film, exactly, just sort of respectably mediocre.

Ford here abandons his effort to out-Murnau Murnau.  He moves his
camera very little, and only once or twice with any real effect or
beauty.  Generally he returns to his more characteristic style of
fixed camera positions looking into deep spaces with lots of
choreographed movement within them.  There is some moody lighting
here and there, and some fog effects on studio “exterior” sets,
reminiscent of those in Sunrise — but the film rarely comes alive visually.

You get a feeling that Ford simply wasn't all that inspired by this
somewhat creaky melodrama — entertaining enough, but just
barely.  Viewers who only know Victor McLaglen's work as a comic Irish drunk in later Ford films will be surprised by his easy, restrained performance here.  It makes you wish he were the
romantic lead in the film, instead of the limp Larry Kent.  And there's one
really powerful camera move — in on the villain as he appears suddenly
in an apparently deserted house.  It's spooky and unsettling — like the push-in on Ethan's face in The Searchers as he registers the horror of the condition of the female captives just  freed from the Indians.  It's markedly different from the longer, Murnau-esque camera moves in Four Sons, which are typically about exploring locations or expressing high spirits.

In his book on Ford, Andrew Sarris said that if Ford's career had ended
with the coming of sound, he wouldn't be recognized as a major
director.  Even Joseph McBride, in his notes for this new set,
says that Pilgrimage, a talkie from 1933, is Ford's first great film.  Having seen just the five silent films in this set, along with Kentucky Pride a few years ago, I must say I find these judgements puzzling.  3 Bad Men and Four Sons are hardly lesser works than Pilgrimage, The Iron Horse is a masterful film with elements of greatness, and Four Sons is one of the finest achievements of the silent cinema.

Ford would go on to make finer films, but he was “major” well before the coming of sound, at least in my book.