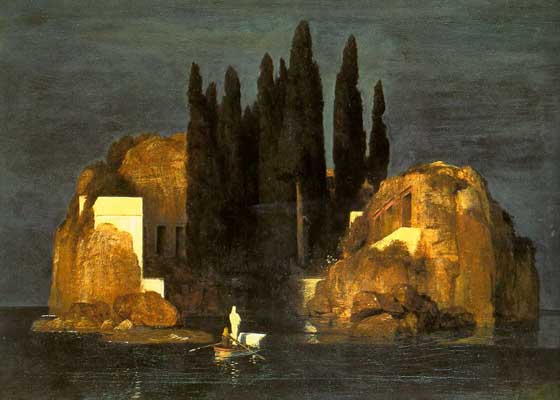 I've written before about the painting above by Arnold Böcklin, The Isle Of the Dead, which reportedly inspired some of the compositions in Hitchcock's Vertigo.  It was an image that was important to Val Lewton, as well.  A reproduction of it hangs on the wall of one of the interior sets in Lewton's I Walked With A Zombie, and of course Lewton made a film called Isle Of the Dead, which references the image more powerfully, in the film's setting.

Lewton and Hitchcock had crossed paths before they made any of these films.  Lewton was working as a story editor and assistant to David O. Selznick at the time Hitchcock made Rebecca for Selznick.  I think Lewton learned a lot from Hitchcock on that film — specifically how to create a mood of supernatural dread using only lighting and suggestion.

Hitchcock learned from Lewton in return.  Lewton's The 7th Victim has a very creepy scene (below) in which the heroine, home alone, is taking a shower behind a translucent curtain when suddenly the silhouette of an older woman materializes on the other side of the curtain, delivering an ominous warning. 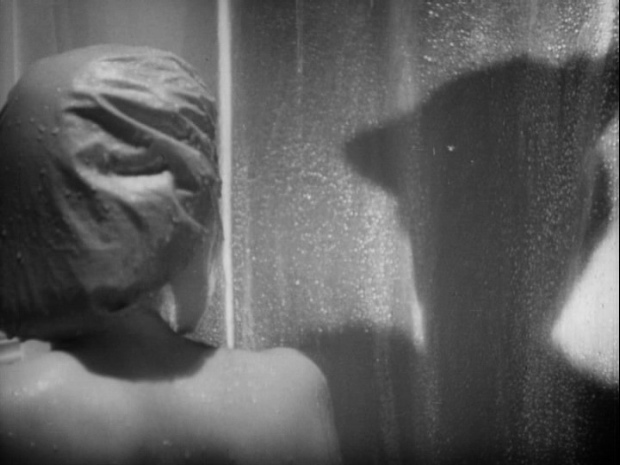 The moment doesn't escalate into violence, as it does in Psycho, but the sense of surprise, of violation, of vulnerability is exactly the same.  The similarity of the two scenes is too great to be coincidental — and I think we can see Lewton's influence on another important Hitchcock film.  The whole tone of Vertigo — quiet, dreamlike, subtly, ambiguously ominous — is far closer to the tone of Lewton's RKO horror films than it is to Rebecca, which is essentially a very classy and delicate rendition of the spooky atmosphere found in old-fashioned Gothic fiction.

The house, with its ghost, haunts the heroine of Rebecca.  In Lewton's films, and in Vertigo, the whole world is haunted, unhinged — it has become a spooky maze with no exits.  Hitchcock's innovation was to create Lewton's deranged dream world in color, in California sunshine — which is ultimately much more unsettling.