The 19th-Century showman P. T. Barnum is probably best known today for the circus which bears his name — the only one of the great American circuses to survive into the 21st Century — and for a line he never spoke, “There's a sucker born every minute.”

Barnum didn't see his public as suckers but as citizens of a grand republic in desperate need of cheering up.  Though a religious man himself, a teetotaler and (eventually) an abolitionist, he carried a life-long resentment against the dour form of religion he grew up with in his native Connecticut.  He believed that America's spiritual well-being depended on regular relief from the grim industriousness and fun-killing morality of its Puritan roots — and this he set about providing with an energy and inventiveness that still boggles the mind.  In the annals of American show business, only Walt Disney comes close to being a comparable figure — and Barnum built his entertainment empire in an age when newspapers and handbills were the only mass media available to advertise his spectacles.

Barnum perpetrated hoaxes, to be sure, but never too seriously — he paid journalists to question their authenticity as a way of drumming up interest in them.  He knew that people enjoy being fooled, if the foolery is entertaining enough.  He had a passionate belief in the necessity of giving the public good value for its entertainment dollar, and humbug, if it's spectacular enough and outrageous enough, is always fun.

Though Barnum sponsored touring shows and circuses, the heart of his empire was the American Museum, securely anchored in downtown Manhattan.  There had never been anything quite like it — part art gallery, part museum of natural history, part zoo, part carnival midway, part theater.  It housed respectable paintings and sculptures, wax figures of famous people, miniature models of exotic cities and structures, human skeletons, mummies, gemstones, historical artifacts (real and bogus), fossils, stuffed and live animals and ever-changing exhibits of human “freaks”. 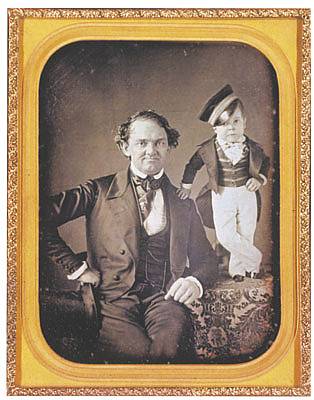 In addition to all this the museum hosted one of the largest theaters in New York, with its own repertory company, presenting plays (advertised as dramatized “lectures” to skirt the city's strict theatrical regulations) and variety acts, everything from ballet dancing to blackface minstrelsy.

You could say that Barnum in his museum spent his life bringing together things that the official culture of the 20th Century, spurred on by increasing specialization within the academy, did its best to separate into distinct categories and distinct venues.  Art belonged in art galleries and art museums, stuffed animals belonged in natural history museums, live animals belonged in zoos, freaks and hoaxes belonged in carnival sideshows (if they belonged anywhere), dramas and variety shows belonged in specialized theaters located in theater districts.

In many ways Barnum's museum was a better and more inspiring reflection of real culture than our ghetto-ized entertainment scene — and I think you could make a case that the Internet is allowing Barnum's vision to have a rebirth in the culture of the 21st century.  Boing Boing, for example, calls itself a directory of wonderful things — which is just a virtual version of Barnum's “showcase of wonders”.  A blog like Tom Sutpen's If Charlie Parker Was A Gunslinger tries to open a window on visual culture with no preconceived intellectual firewalls between categories of images — and thus reflects the way we actually experience visual culture.  In its own small way, this blog, partly inspired by Sutpen's enterprise, tries to do the same thing.

So Barnum is back — or perhaps he never really left, since we have always seen and experienced the world of “curiosities”, of “wonders”, of “entertainments”, of “art” the way Barnum did, as a jumble, a continuum, a conversation between different kinds of things.  Now, that conversation has emerged into the light again in virtual space, as it once existed in the physical space of Barnum's museum . . . and as it exists in the physical spaces of Las Vegas, too, if you want to go there — and let's face it, almost everybody does, whether they admit it or not.