Folks who don't live in the New York City area might not know about the High Line — a stretch of elevated railroad tracks in lower Manhattan.  It used to carry freight trains into Manhattan terminals but stood abandoned for years and attained a kind of mythical status, because it became overgrown with vegetation and constituted a bit of wilderness in the middle of the city.  It was officially inaccessible but became familiar through photographs taken of it and the stories of people who sneaked up to have a look at it themselves.

The basic structure has remained sound and a campaign was launched to turn it into a park — a very odd park.  The park opened this month and my friend Jae Song, a resident of Brooklyn, went to see it.  He sends the following report of his initial impressions, illustrated with photos he took, mostly using the panorama mode on his cell-phone camera:Went to visit the High Line.
For crowd control on opening day they set up a rule — you could only enter from one end and exit at the other.  Even
though it wasn't opening day when I visited, and there was hardly anyone there, when I tried to go up the “exit” stairs there was some fascist
telling me I had to walk down to the entrance at the other end. (Why
can't people just think on their own?  Why do they have to follow strict
rules without knowing what the rules are for?)

This should have tipped me off as to what I was about to experience . . .At first — it was exciting to be able to go up to those old tracks that have been closed off for so long.

There are benches that rise up from the ground in sleek fashion.  There are big lounge chairs made of dark wood.  There's a space with auditorium seating that looks out over 10th Avenue.

The palette is modern grey and dark brown
. . . with weeds carefully placed growing in patches here and there.


Everything is very well thought out and all . . . perfect.

I walked all the way to the far end and then went back to the middle and took a seat on one of the lounge chairs.

The High Line is like one of those beautiful old historic factories that is converted into a clean modern luxury loft.

The modern sleekness has cleaned all emotion from the place.  No mystery — no possibilities.

It's all too perfectly designed, too purposefully placed . . . everything —
every “haphazard” weed, every loose pebble.  Even the concrete slabs on
the ground have perfectly placed irregularities.  All of it makes it
impossible for me to make the space . . .


my space.  I can't connect with
it personally.


I can't do anything in the space that the architects and designers haven't already prepared for. 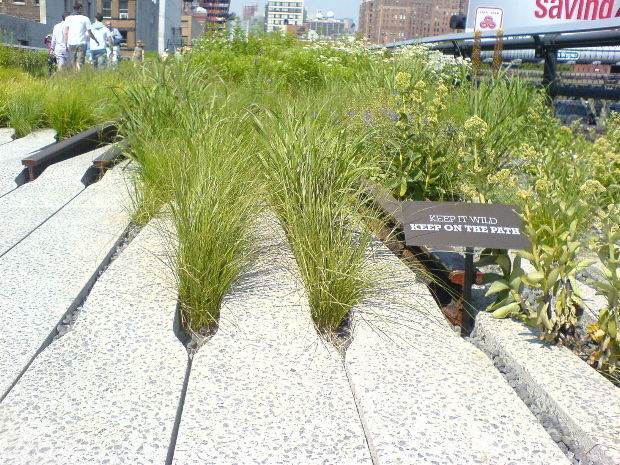 I feel controlled by whatever corporation it was that took it
over.  The planners obviously wanted to keep the
feel of the old High Line — but the old High Line was an iron
industrial structure that nature took over, in unpredictable ways.  There's nothing unpredictable about it now.
It's like watching an M. Night Shyamalan movie.  It is very well crafted — I
can't fault him for not making a very well-constructed movie — but most
of the time I don't really feel anything, and the movie has very little
life.  It's not that I don't like the movie, it's that I feel I'm


supposed to like it, I'm supposed to feel a certain way, but I don't, and I want to feel something but I don't . . . and that pisses me
off.


Unlike watching a Godard film.  It's sloppy as hell but so exciting, and it makes me giggle, and sometimes I'm glued to the screen and I
don't even know why . . . I don't know what the hell's going on.


Why is there this need to make beautiful old things into clean
sterile piles of nothing?  Do they make yuppies feel safe?  Because they
don't have to think — they go, they know what they are suppose to do,
they do it, they post pics online, they check it off on their
experience list.

Why can't something just be, age and become whatever it is it is
becoming?  What's with face lifts and boob jobs?  What's with “luxury”
condos?  What's with the High Line!  Another place for people to make
money now I suppose.  (There are bars and restaurants opening up all
over the neighborhoods near the High Line, and up on the High Line, too.)  Personally I like a really nicely aged
steak rather than a fresh cut.

Jae has made subsequent visits to the High Line and modified his opinion of it somewhat.  New Yorkers are appropriating it and making it their own.  That's what New Yorkers always do.  When Central Park opened in 1873 one of its designers, Frederick Law Olmstead, wanted visitors to use it exactly as he imagined it being used — strolling its paths in a civilized manner, serenely admiring his vision of nature.  He didn't want bars or bandstands or ball fields — anything that might attract or appeal to the baser natures of the great unwashed.

So there's hope for the High Line, too.  Perhaps Jae will write a follow-up report on the progress of its re-incorporation . . . as a people's park.

One thought on “REPORT FROM NEW YORK: THE HIGH LINE”