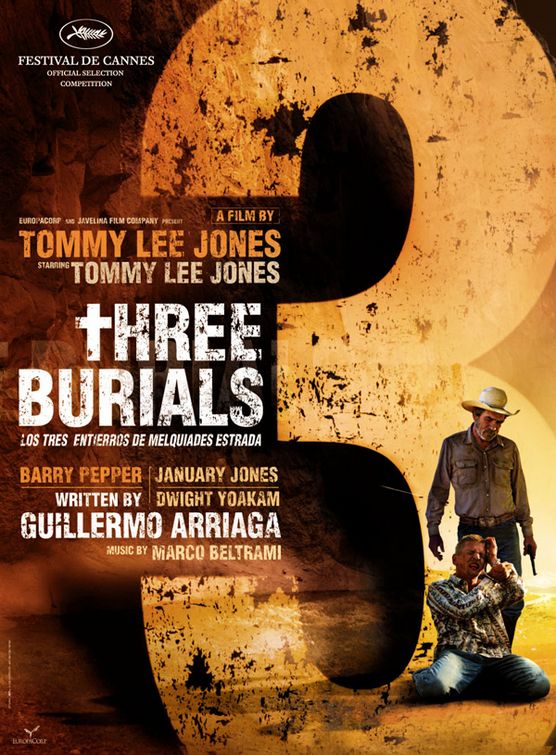 Tommy Lee Jones, one of the great actors of his generation, has, with this
film, become one of the most important contemporary directors.
It’s just miraculous.  The wonderful performances by the ensemble
cast and by Jones himself might have been expected — but the brilliant
script and the brilliant filmmaking testify to a sensibility at home within the whole range of cinematic expression.
The sense of place that the film communicates, via Chris Menges’s stunning
cinematography, reminds one of John Ford.  Jones, like Ford when
he was shooting in Monument Valley, is working here in a landscape he
clearly loves and knows well.  It’s important to him, as it was to
Ford, to make us feel what it’s like to be in and move through that
landscape — and he does. 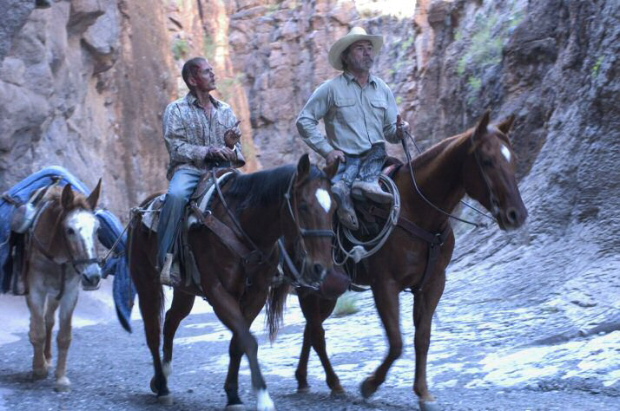 One notes with particular pleasure Jones’s use of horses in the film.  Just watching Jones
sit a horse brings back by itself the whole tradition of the American
Western, in which horses aren’t props but a means of establishing the
authority and conveying the subtler nuances of character.  The horses themselves are
given their own moments — all memorable.  We see a steady old cow
horse try (successfully) to master its hysteria as a man fires a rifle
next to its head.  We see a horse react emotionally as another
horse rides off into the distance — violating the compact of the herd
instinct.  It reminds me a bit of Tolstoy, another serious
horsebacker, who always lets you know how the horses in his scenes are
feeling.

The tale Jones tells, written by Guillermo Arriaga, the author of Amores Perros, is
dark, comic and moving.  It’s set on the Texas border and asks us
to travel imaginatively backwards on the route of the illegal
immigrants — to enter into the memories and dreams the immigrants leave
behind, and so see them more fully as human beings, as opposed to mere
statistics.
The tale is inflected with the sardonic, broadly comic Mexican view of death — Posada’s calaveras ride with Jones here — and the film’s visuals reflect the bold colliding colors of Mexican folk art, all blended seamlessly with the shabby commercialism of American
culture that also defines the world of the border lands — what Carlos
Fuentes calls Mexamerica, in many respects a nation unto itself, which
no wall will ever cut in half, just as no wall could ever really cut Germany
in half.

As in Ford’s great films, the landscape itself finally subsumes human contradiction
and tragedy — infuses a sense of transcendence which expresses itself
as hope.  Irrational gringo optimism and sardonic Mexican resignation transform each
other, merge into one deeply humane vision.