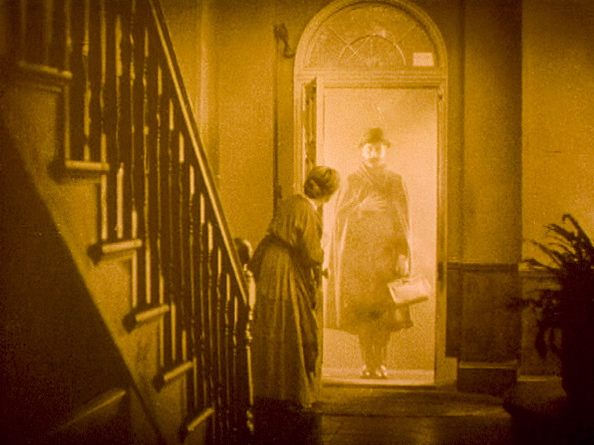 Alfred Hitchcock's silent film The Lodger, from 1927, is wonderfully entertaining, alive with visual inventiveness, with the director's unbridled joy in making cinema.  It's not, however, a terribly successful thriller, and thus not a terribly successful film, since a thriller is what it sets out to be.

The problem is the presence of Ivor Novello in the title role — or perhaps the way Hitchcock uses him.  Novello was a handsome fellow with a decidedly fey quality.  Hitchcock would eventually find ways of using an actor's ambiguous sexuality to disturb an audience, keep it off balance, but he doesn't seem to be trying to do that with Novello.  He lurches back and forth between presenting Novello's lodger as an almost inhuman visual icon of menace and mystery (see above) and letting the actor present his own impersonation of a matinee idol.  Novello does his best to appear brooding and menacing from time to time but he succeeds only in suggesting a man vaguely distracted and slightly peeved about something. 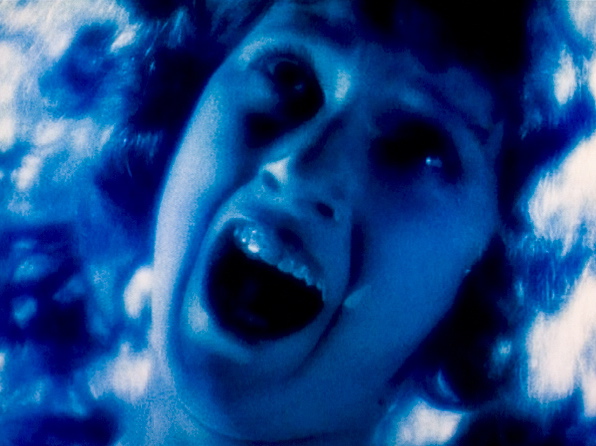 There's nothing really creepy about Novello's lodger, except that he seems to inhabit a different film than the one Hitchcock is trying to make.  He comes across as conventionally, not pathologically, insecure.  The unhinged desperation we sense in Bruno from Strangers On A Train or Norman from Psycho is nowhere in evidence.  It's really impossible to take Novello's lodger seriously as a suspect in the “golden curls” murders, or as a passionate suitor of the heroine.  At the same time, he can't really secure our sympathy as that archetype familiar from so many later Hitchcock films, the innocent man wrongly accused, since we spend most of the film without any clear information about his guilt or innocence.

Still, Hitchcock constructs his movie with relentless, creative imagination as though it had a real villain or potential villain or wrongly accused villain at its center.  We can admire and enjoy its brilliance but we can't care about its story — which offers only the most perfunctory kind of  suspense, without any subliminal psychological undertow.  The film is aesthetically dazzling without being really engaging on any other level.