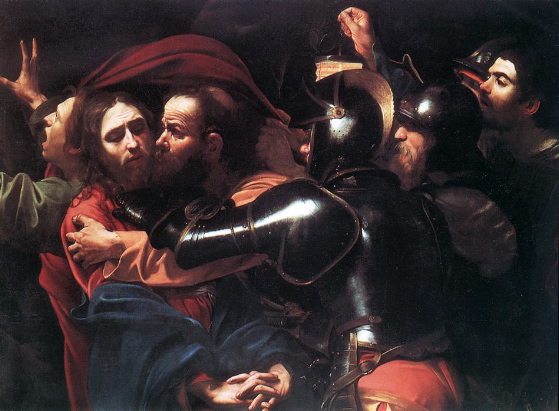 Look at this image.  Just look at it.
It was painted, in 1602, by Caravaggio — at least, that’s the current
wisdom.  It was long thought to be a copy of a lost Caravaggio original
made by a follower or pupil, but in the 90s an art historian made a
convincing case for the attribution to the master himself.
Formally, it’s a dazzling work.  The figures occupy a shallow space but
the picture still produces a strong impression of depth because of the
stereometric modelling of the light, the way the figures block and seem
to jostle each other even in the confined space and the way the centurion’s armor
jumps out at us like a physical assault.  It has, finally, the plastic quality of a relief sculpture.
Caravaggio has placed himself among the dramatis personae here, as the
bearded figure on the right holding the lantern.  This reinforces a
sense of the immediacy of the dramatic situation depicted, as
though it were an incident the artist himself witnessed and recorded
faithfully out of some urgent compulsion.
I personally would trade almost all the painting done in the 20th Century for this one work.  Wouldn’t you?