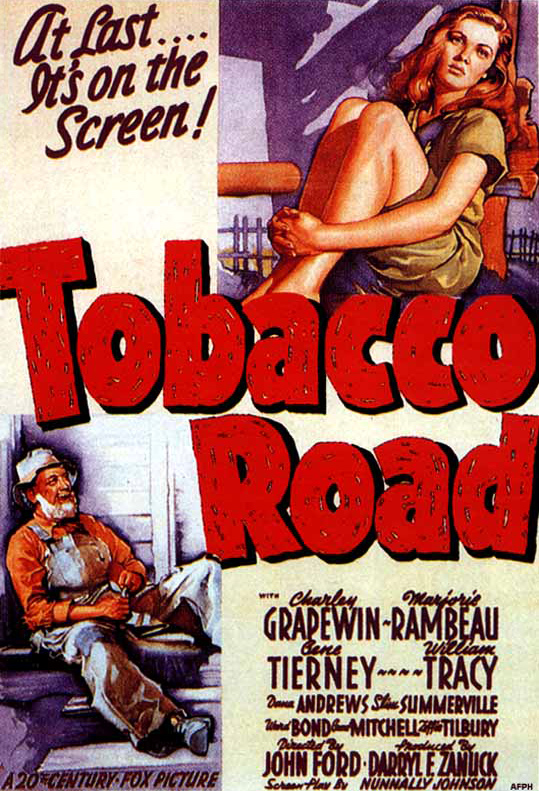 In
1941 John Ford, as a contract director at 20th-Century Fox,
made two films for the studio.  One was the sublime How Green Was My Valley.  The other, made right before Valley, was a bewildering misfire — Tobacco Road.

You just have to throw your hands up at Tobacco Road.
It's clear why the studio would be interested in the property — based
on a novel by Erskine Caldwell but derived more directly from a
theatrical adaptation which at the time held the record for the
longest-running Broadway play of all time.  The movie pokes
merciless fun at the same class of sharecroppers who were treated as
almost saintly characters in The Grapes Of Wrath, made only a year before.
The film's humor is extremely broad but rarely funny.  Ford
lets his actors mug and jerk around like puppets — they might as well
be shouting “look at me, laugh at me!”  It's only the occasional
throwaway gags that actually elicit chuckles.  At the end of the hi-jinx Ford tries to summon up some pity for his
rustic clowns, but they aren't real enough to pity.

The film is
beautifully shot and its perversity is impressive if not exactly
entertaining.  (Some might find the whole thing worthwhile just
for the chance to watch a scantily-clad Gene Tierney slithering
lustfully through the dirt like a sex-crazed slug — surely the strangest thing she was ever
asked to do in Hollywood.)  It almost seems as if Ford was
indulging his worst
instincts — to get them out of his system before tackling How Green Was My Valley.
Apparently it worked — in the latter film he hardly makes a single
wrong move, and takes the poetic possibilities of filmmaking about as
far as anyone ever has.

If he did indeed need to root around for a bit on Tobacco Road to create the miracle of How Green Was My Valley you'd have to say that, on balance, it was a road well-taken, though not much fun to revisit today.