If as a general rule you assume that officers and representatives of large corporations are morally depraved you'll never go far wrong in your dealings with them.  This is a bit different than saying such people are inclined to do bad things, since all of us are inclined to do bad things from time to time.  Moral depravity is a special condition which results from inhabiting a mind-set and a culture in which self-interest takes precedence over all other considerations — in which no value is higher than advantage to oneself or to one's organization. 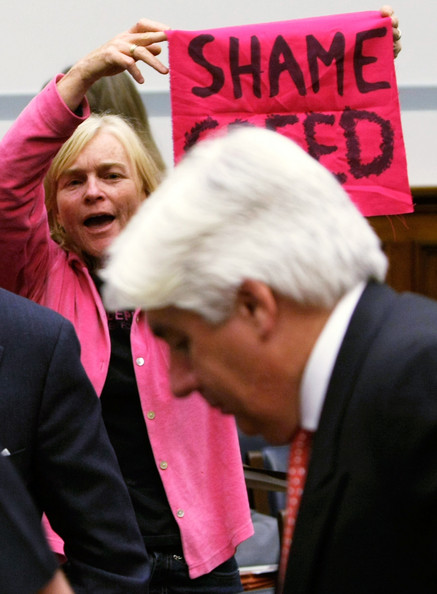 You might have thought, for example, that the officers at A. I. G responsible in large part for driving their company, and the world, to the brink of financial ruin might now be appalled at what they did — wracked with shame that their lunatic greed forced millions of American taxpayers less fortunate than themselves to fork over a portion of their personal wealth to bail out A. I. G., lest its failure precipitate a global catastrophe.

Instead, these officers feel that a portion of this taxpayer wealth should be awarded to them in the form of bonuses — a kind of reward for their irresponsibility and moral nihilism.  This is how sociopaths reason — anything which benefits them is sensible and good.  They are shocked, or at least terribly confused, when others question this principle.

Barack Obama doesn't seem to understand that reforming our financial system involves dealing with, anticipating the behavior of, sociopaths — perhaps because so many of his financial advisers are themselves products of the sociopathic culture of Wall Street.

He'd better wise up fast or we're all going to be in very deep trouble — even deeper than the trouble we're already in.

Stephen Colbert has sarcastically suggested that the American public needs to become a howling, pitchfork-wielding mob bent on taking the country back from companies like A. I. G. and the politicians who enable them.  His suggestion is not without all merit.  When the fate of your nation, when your children's future and your grandchildren's future rest in the hands of sociopaths, the option of armed rebellion shouldn't be taken off the table altogether.