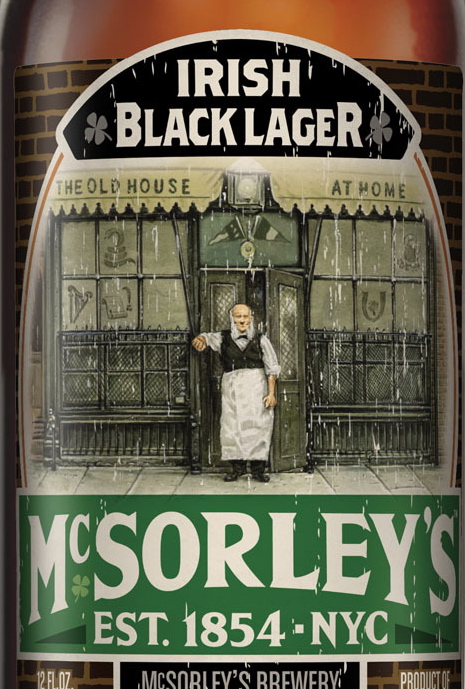 And malt does more than Milton canTo justify God's ways to man.

The great caricaturist Drew Friedman recently designed the label above for one of McSorley's house brews.  McSorley's, in downtown Manhattan, is the oldest continuously operating bar in New York, going strong, or at least going, since before the Civil War.  It has a special place in my heart, for it was there I began my lifelong love affair with beer.

In 1968, I spent the summer of my 18th year in the East Village, NYC, in an apartment near McSorley's.  The bar had not at that time been adopted by NYU frat boys, and was a dive, little changed from the 19th Century.  Old, grizzled men, many of them retired merchant seamen, hung out there in the afternoons drinking the fine house ales and filling up on the cheap sandwiches sold at the bar.  The drinking age was 18 back in those days, and my friends and I hung out there in the afternoons, too.  It was a grubby but magical place.  It looked exactly the way it looks in the 1912 painting below by John Sloan: 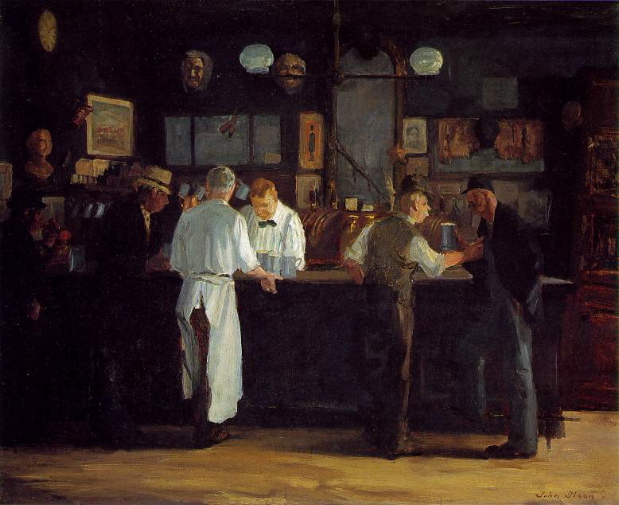 Women were not allowed in McSorley's then — a 19th-Century policy that would soon be challenged by feminist activists.  The first of them who walked in and demanded to be served got a pitcher of beer emptied over her head.  The courts eventually ruled that McSorley's could not legally bar women.  This opened the way to its current status as a hipsters's joint.  It still looks the same as it always did but cannot be visited by sane people at most hours of the day and certainly not after dark.

I'm glad that women are served there now, of course, and its popularity will insure its survival for another century or so, but the hiraeth comes upon me when I think of it as it was once — the hiraeth, a Welsh word that means “the longing for what has been”.

The quote above (thanks, Django) is from a poem by Housman called “Terence, This Is Stupid Stuff”, which also contains the following lovely lines:
Oh I have been to Ludlow fair

And left my necktie God knows where,

And carried half way home, or near,

Pints and quarts of Ludlow beer:

Then the world seemed none so bad,

And I myself a sterling lad;

And down in lovely muck I've lain,

Happy till I woke again.