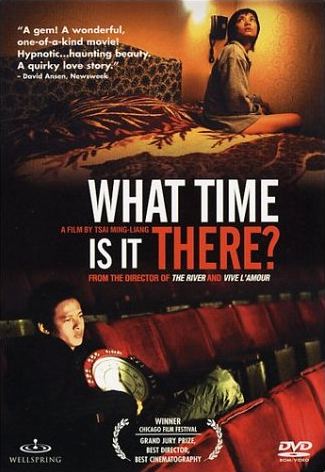 Perhaps
it's not surprising that the rapidly urbanizing culture of China has
produced filmmakers making deep and profound work about urban
loneliness.  Urban and suburban loneliness in America has been
treated by pop sociologists like Robert D. Putnam, in his book Bowling Alone . . . and in TV sit-coms we see models of coping strategies in shows like Friends and Sex In the City,
where sex and gossip about sex among a circle of acquaintances try to
fill up the void that's clearly felt both by the characters and by the
vast numbers of people attracted to these series.

But Chinese
filmmakers like Wong Kar-Wai and Tsai Ming-Liang are intent on looking
at the phenomenon head-on, as something existential and not susceptible
to easy or trivial consolations.  The criss-crossing lives in Wong
Kar-Wai's films, that touch each other without ever making meaningful
contact, exist in a landscape of exciting visual stimulation, which
adds to the irony.  Tsai Ming-Liang has a different strategy.

In What Time Is It There?
he holds his camera steady on urban spaces until they yield up the full
measure of their sterility — he gives us time to enter them and feel
their emptiness, and this creates a strong sense of identification with
the stranded, cut-off souls who inhabit them.  Tsai Ming-Liang
doesn't tell us much about these characters, they don't voice their
hopelessness, but we can see it in everything they do, lovingly and
devastatingly observed. 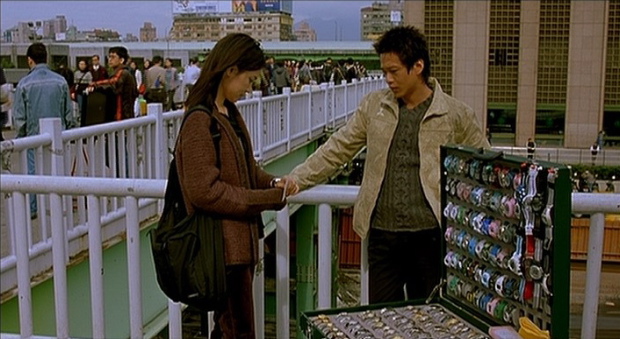 What Time Is It There? is set in motion by the briefest of encounters on a public sidewalk, between a
street vendor of cheap watches and a woman who buys a watch for her
upcoming solo visit to Paris.  Before she goes, she gives the
vendor a small cake, to thank him for selling her a special watch she
wants, his own.  This tiny, infinitesimal exchange of regard fills
up the rest of the film.  It leads nowhere in purely narrative
terms but we feel how it haunts the two people involved, sharpening
their sense of distance from other human beings.

We are so far
in these films from the thought-balloon dialogue of modern American
films, where the characters tell us exactly what they feel, exactly why
they're doing what they're doing, and so give us a chance to categorize
and dismiss it.

John Ford's The Searchers, Wong Kar-Wai's masterpiece In the Mood For Love, and Tsai Ming-Liang's

What Time Is It There?,
a small masterpiece in its own right, all offer in their endings images
of an almost mystical redemption — but they don't offer resolutions,
or solutions.  They set off chain reactions in our hearts — they send us on journeys . . . they make us searchers.

[The frame-grab above is from a wonderful site called DVD Beaver,
which offers in-depth reviews, with lots of technical information,
about
international DVD releases.  Check it out and make a donation if
you can to support its valuable work.  Sadly, the DVD version of What Time Is It There? available in the U. S. is not enhanced
for 16:9 sets — it's a good transfer but this film, with it many long-held
master shots, cries out for as much screen space as possible.]