Westerns used to be referred to sometimes as “horse operas”.  The term was slightly dismissive but has a kind of logic.  In good Westerns — good A Westerns and good B Westerns — the drama is punctuated and often driven forward by passages of action which have a musical quality.  For lovers of the genre, these passages are like arias, the great memorable numbers in the classic operas that you walk out of the theater humming.  In some ways they're what the show is all about. 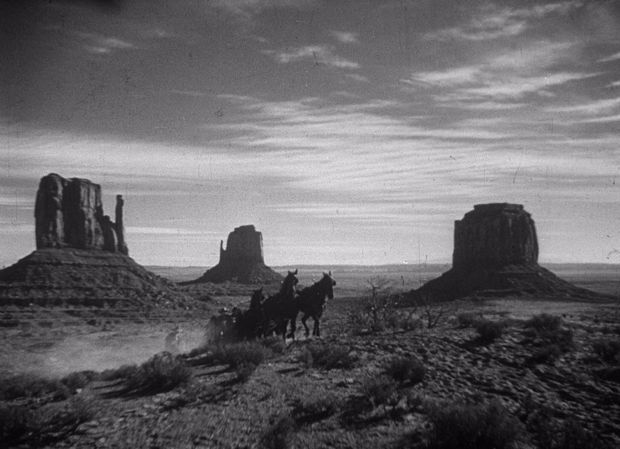 The makers of most modern Westerns have forgotten this basic organizing principle of the form, if they ever understood it at all.  Horses in modern Westerns, as I've remarked elsewhere, are props, accessories, means of conveyance — not tenors or sopranos with a vital function to play in the show.  Phoning in the horse action in a Western is the equivalent of an opera director playing the great arias as recorded background music while the performers get on with the serious business of speaking the dialogue of the libretto.

Some Western “arias” don't require horses — these are the shoot-outs in which enemies face off and battle to the death.  These arias are all about space — about the camera making clear what spaces the combatants are in and what problems it confronts them with.  Their negotiation of these spaces becomes a kind of violent dance — like the violent dances that take place in a boxing ring or a bull ring, which become legible and beautiful only when the limits of the arenas are clear to the spectators.

The spaces can be intricate, as with a running gun battle through rocky terrain or through the streets and between the buildings of a town.  The spaces can also be very simple, as in the ultimate Western aria — the face to face showdown between two small groups of men or just two men in an empty street or corral or farmyard.  The dance here is usually very stylized and formal — from the challenge to the slow walk towards the meeting to the lightning-fast denouement.

In all these arias, the director needs to know how to elaborate and arrange “the kinetic melody of movement”.  When the directors of Westerns forgot how to do this, it was like that development in modern opera when composers forgot how to incorporate, or lost interest in incorporating, memorable melodies in their scores.  Opera ceased being a popular art form with this development, and Westerns will never again be a popular film genre until the modern directors of Westerns re-learn the art of the Western aria.