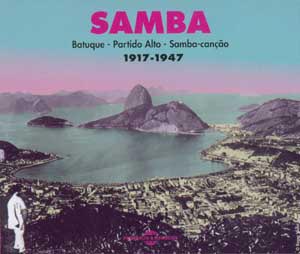 In a previous post about Orson Welles's ill-fated Brazilian film It's All True
I mentioned that Welles came to see the history of the samba as the key
to Brazilian culture.  I wondered if there might be a CD
collection that showcased that history.  Of course there was, and
of course it was French — the French having a knack for combining
passion about American music with a logical approach to presenting it.

Fremeaux & Associates offers several historical surveys of
Brazilian music which give a good idea of what Welles found when he
visited the country in 1942.  The one above surveys the samba
alone, which originated around 1917 as music for the Carnival and
eventually became a highly commercialized form of dance music
throughout the Americas in the 1940s. 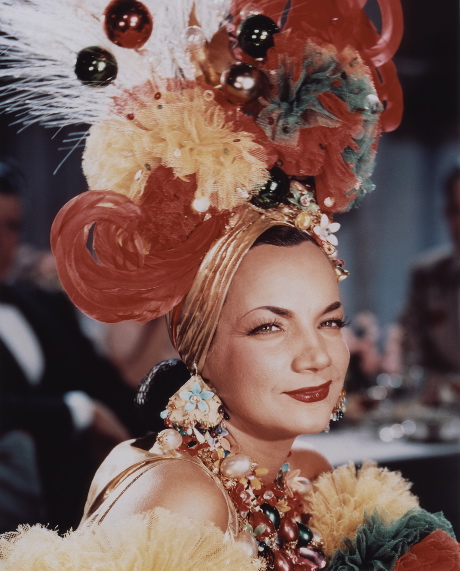 The great revelation of this set is Carmen Miranda in her pre-Hollywood
days.  Before she became a musical comedy star, famous for her
tall fruit-basket hats (“Bananas is my business!”), she was one of the
musical treasures of Rio — a terrific and very sexy singer. 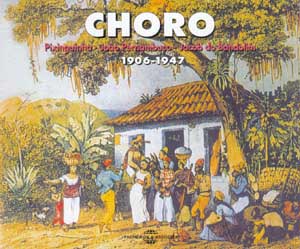 But samba, as it turns out, is just the rio
into which all streams of Brazilian music flow.  The oldest style
it incorporates is choro, an instrumental form meant for listening, not
dancing.  It usually features ornate flute lines accompanied by
various stringed instruments.  It started out very European in
sound, with African rhythms adding flavor, but later became a bit more
rambunctious.  Its evolutions are charted in the collection
illustrated above. 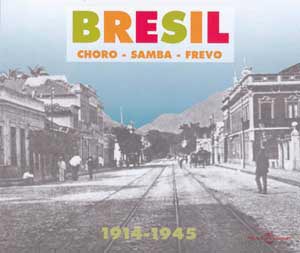 Other subsets include brass marching-band compositions and various
regional styles, many of which are charted in the Fremeaux
&
Associates collection above.  Fremeaux offers a couple of other
historical surveys, but these three will give you a comprehensive
picture of Brazilian music in the first half of the 20th Century.
The pleasures they deliver are not primarily scholarly, however.
There's hardly a song on any of the two-disc sets which is less than marvelous, and all of them
will set you either dreaming or dancing.  (The imported sets can
be found on Amazon, most cheaply through their Amazon Marketplace
sellers.)

Listening to these CDs you'll see right away what so enchanted Welles
back in 1942 and grieve anew that he never got a chance to finish his
film about Brazil and the samba.