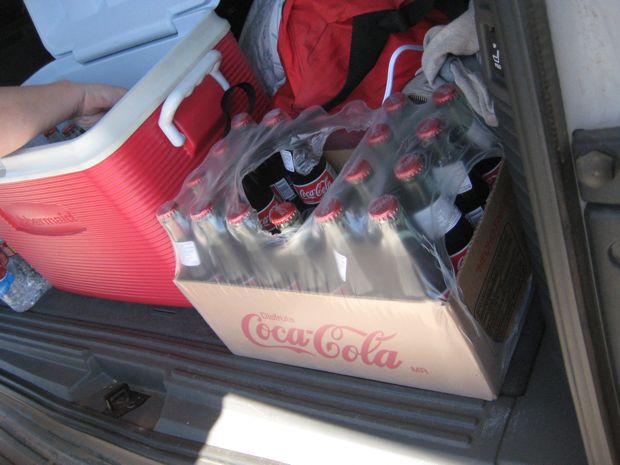 On Wednesday my nephew Harry and I headed off to Lone Pine, California, where hundreds of Westerns and other films have been shot over the years.  Of course we took on board a goodly supply of Mexican Cokes, Mexican Cokes being the key to any successful road trip. 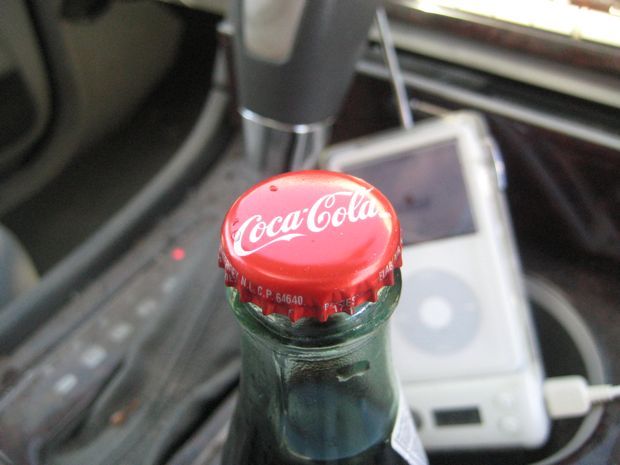 We chose a route to Lone Pine that would take us through Death Valley, which Harry had never visited.  This entailed passing through Pahrump, in Nye County, Nevada, where prostitution is legal, and where Harry snapped a picture of the sign above, advertising one of the Silver State's odder attractions.  The museum is attached to an actual working brothel, and is basically just a large barroom with pictures of whores and newspaper clippings about whores on the walls.  It's well worth a visit, but we had no time for it on this journey. 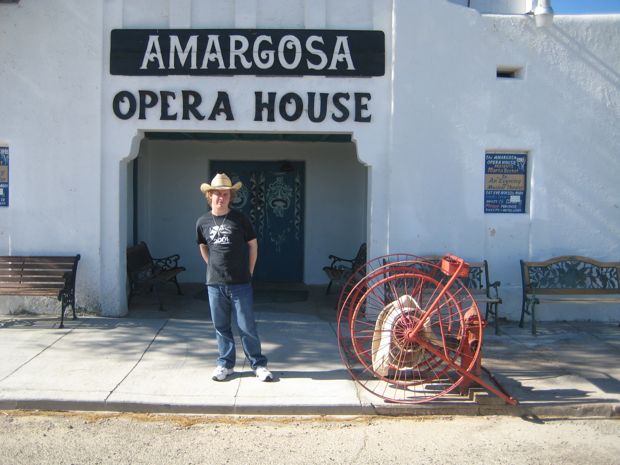 At the edge of the valley we stopped to take photos of the Amargosa Opera House, where an eccentric old woman puts on shows in an auditorium, every flat surface of whose interior she has painted herself with wild designs and figures.  We had no time for this bizarre phenomenon, either, and proceeded into the park. 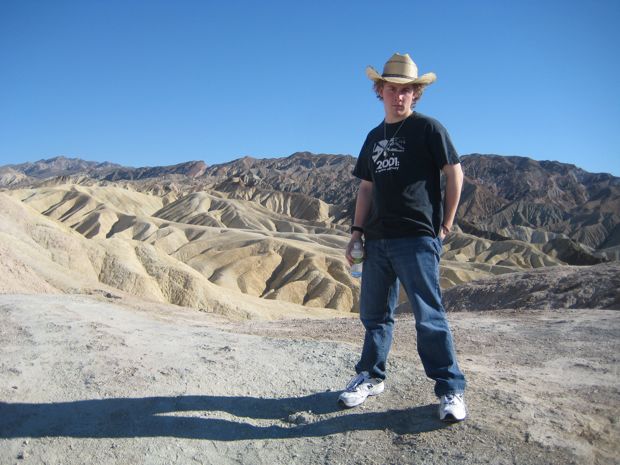 We stopped at Zabriskie Point to take in the bizarre topography (above), then headed to Badwater Basin, the lowest point of land in the Western Hemisphere. 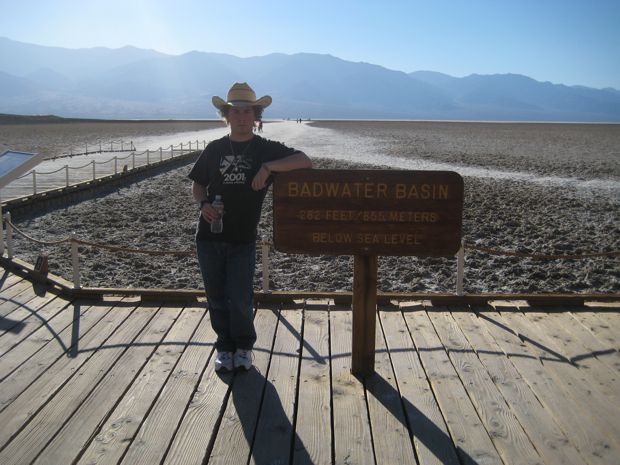 Harry walked far out onto the salt flat there, past the other tourists, and said that the silence was really spooky, with not even a breath of wind disturbing it. 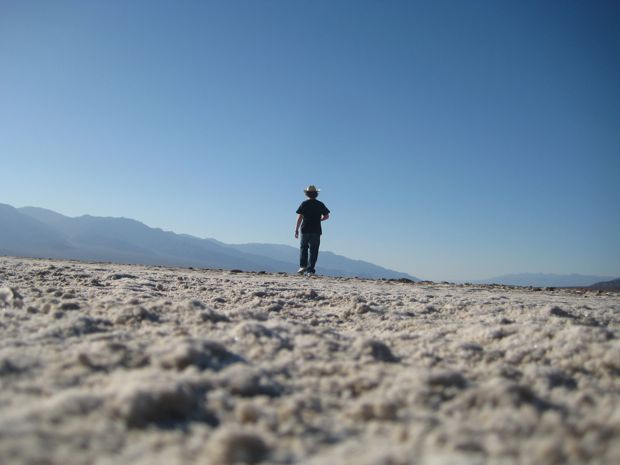 We continued west and stopped at the Mesquite Dunes, a ridge of sand dunes rising up improbably from the desert floor.  We arrived just at sunset, when the light was exceptionally beautiful.

Then on through the night to Lone Pine and the Timberline Motel, run by a family of subcontinental Indians and a bit the worse for wear, but clean, with free wi-fi.  It is one of the only motels in Lone Pine which welcomes smokers, who must be resigned these days to the shabbiest motels in any given locale when seeking roadside accommodation.

I was thus happy to give the Timberline my business, which seemed to be much appreciated, and happy to behold the “Vacancy” signs on the higher-class smoke-free motels in town, and to think how much they must be suffering in the current economy.  I do not wish them well.Harry had a decent steak and I had a hideous shrimp dish at a Chinese-American restaurant on the main street of town, then we hit the hay to rest up for our visit to the fabled Alabama Hills the next day — sacred territory once walked and ridden through by Randolph Scott and Budd Boetticher. 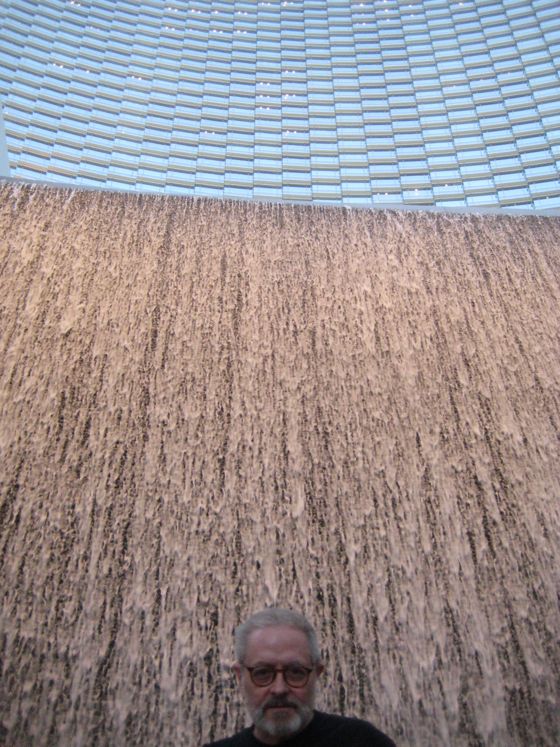 Here are a few more images of City Center, the city within a city recently erected in the middle of the Las Vegas Strip.  It is, as I've noted, a vision of the future as it might have been imagined in the Sixties — cold modernism inflected with the charm of a future locked in the past, and thus unthreatening.  If this seems confusing, conceptually, it merely reflects the conceptual confusion you encounter when actually visiting the place.It is an architectural folly, on a grand scale. 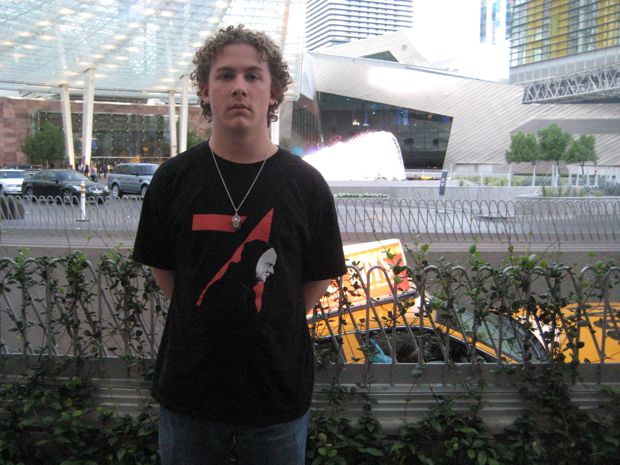 The automobile entrance to the Aria Hotel is a vast roundabout with a fountain in the center, on which colored lights play.  One large section of the curved wall next to the port-cochère is a waterfall with continually shifting patterns. 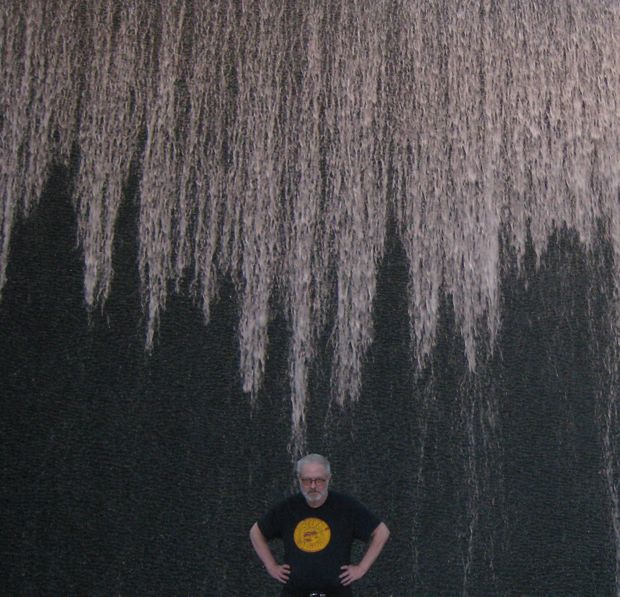 The designers of the complex have done a good job of simulating the quirky progression of spaces you find in a city that has evolved organically over time.  Still, you feel the planning that has gone into it all — it's like an urban environment in which zoning laws, not the life of urban dwellers over generations, have determined the mix of the thing.  There is much here that is surprising, but nothing really startling — nothing on the order of a brownstone basement turned into a funky little leather bar by some eccentric entrepreneur with a dream, much less a friendly neighborhood porn shop. 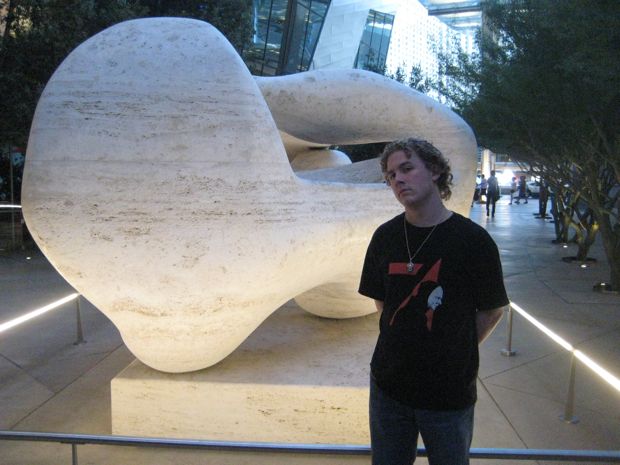 Of course, you find less and less of that sort of thing in the modern Manhattan of the duppies, too.  Ordinary people create true cities, not planners, however imaginative and humane, and there always has to be room for what percolates up from the bottom, where most innovation begins.  There is no way up from the bottom at City Center, as there is virtually none in Manhattan these days — money and new notions of social hygiene have driven those forces of innovation elsewhere, or merely stifled them. 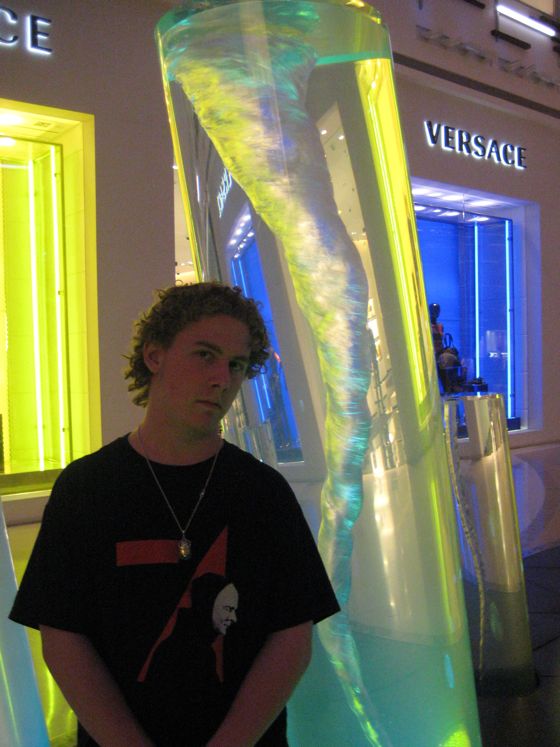 Still, it's interesting to wander through this preposterous and misguided dream of a city, simply because it is a dream.  If it lacks the grit and vitality of a real city, especially these days, when it has so few visitors, one is nevertheless touched by the effort to celebrate urbanism, to imagine and recreate its delights.  The sheer surrealism of it is engaging.

The waterspout in a tube Harry is sitting on above looks like some sort of public space toilet.

The valet pick-up station at the Aria has a black and white video wall on which random words scroll across.  It's neither beautiful nor inspiring, but it's bold.

Back home, in the comforting mess and clutter of my apartment, created according to no conscious plan, I search for le mot juste to describe City Center — and find it to be “an inspired void”.  An inspired void in the center of the inspired void that is Las Vegas — the true capital of the modern world. 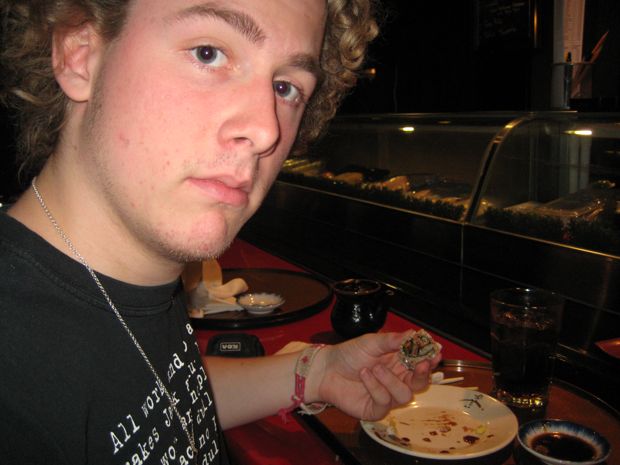 The day after our Red Lobster experience, my nephew Harry and I decided to treat ourselves to some superlative seafood, in its purest form — sushi.  We had an early dinner at Hamada, the Las Vegas branch of a noted Japanese restaurant.  It's a cool place, a bit off The Strip on Flamingo, with traditional Japanese decor and waitresses who wear kimonos. 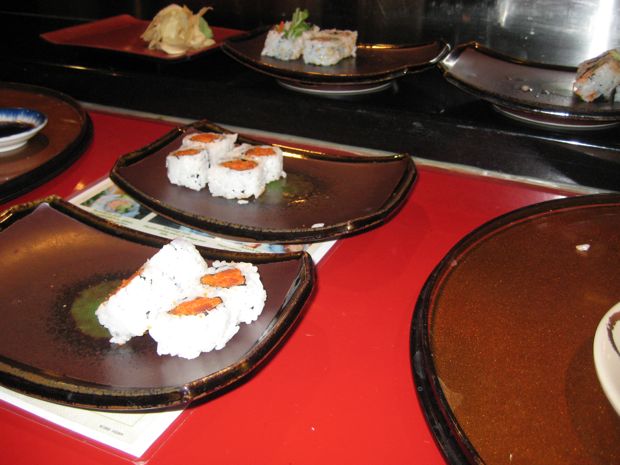 We sat at the sushi bar and ordered ambitiously, but I failed to realized that each “piece” I marked on the order card was actually two pieces — so we were served twice as much food as I expected.  Of course, it's hard to find yourself confronted with “too much” octopus or tuna or salmon sushi, or too many salmon-skin rolls.  We took home eight spicy tuna rolls, out of the sixteen I had inadvertently ordered, which we polished off later that night.As dining disasters go, this was a very pleasant one. 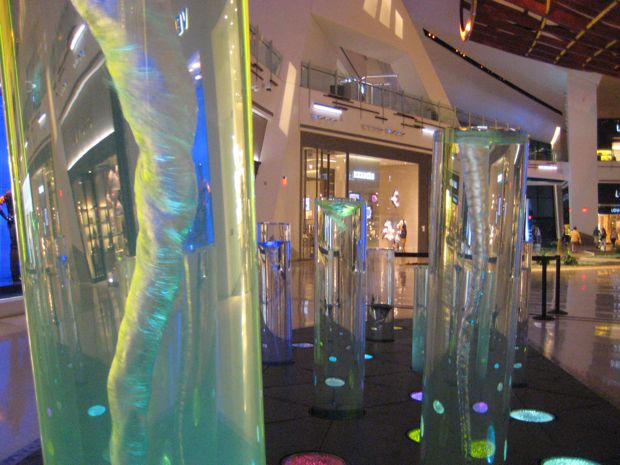 . . . and it is empty.After our Red Lobster experience yesterday my nephew Harry and I decided to make a thorough investigation of City Center, the massive city within a city which recently opened in the middle of The Las Vegas Strip.  I'd visited a casino there and a room at the Aria Hotel, where some friends were staying, but I wasn't quite prepared for the scale and complexity of the whole development. 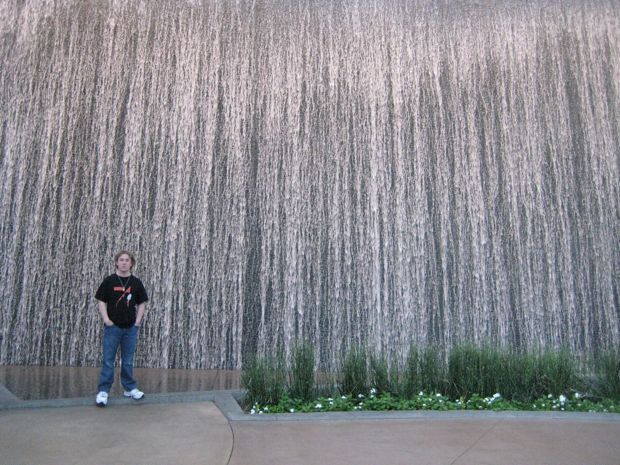 It started to go up when Las Vegas was booming, almost went bankrupt when the economy crashed, and somehow managed to get completed last year.  It represents an astonishing vision — a vision of the 21st Century as it might have been imagined by people in the Sixties.  Wandering around it is like wandering around in the world of Jean-Luc Godard's Alphaville. 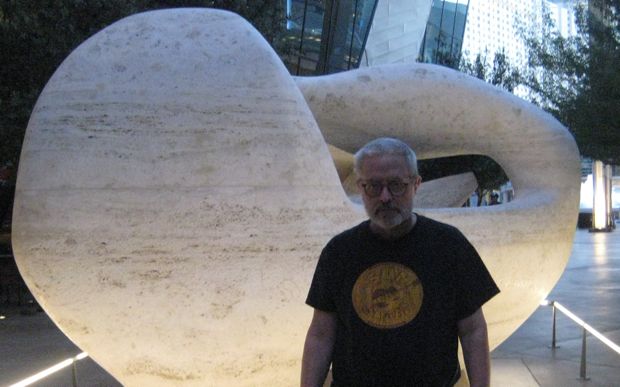 And there's hardly anybody there.  It's like a vast movie set the day before filming is due to start.  The urban vision it reflects seems to belong to the past and yet the theatricality of it has a kind of charm.  It's sort of soul-killing, and sort of enchanting.  In short, it's pure Las Vegas.Who knows what it will be like when the extras arrive to people the streets — if they ever do arrive.

[I'll be writing more about this bizarre, brand-new ghost city in future posts.]